The Nightmare of Druaga: Fushigino Dungeon 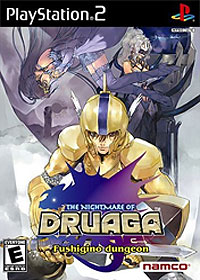 Dungeon crawlers can be a mixed bag. They need to be able to offer structured, well thought-out gameplay and a variety of environments and experiences large enough to avoid becoming weighed down by the eventual tedium of dungeon upon dungeon. The Nightmare of Druaga: Fushigino dungeon succeeds for the most part, despite some very deliberate and occasionally frustrating limitations imposed upon the player.

The Nightmare of Druaga follows the story of Gil, the prince of Babilim. Three years prior to the events in the game, Gil rescued Ki from the clutches of an evil demon named Druaga. A mysterious sorceress named Skulld has now abducted Ki and locked her in Druaga's tower. Gil must venture inside the tower to rescue Ki and restore order to the kingdom.

While certainly not an award-winning plot, the focus is clearly on the gameplay, where the game fares better. Dungeon exploration and battle is reminiscent of Lufia, in which enemies and the hero both make their movements on grid, and both movement and attacks are determined by their relative speed measurements. Enemies are visible on the field and only move or attack when Gil moves or attacks. This allows players to build strategies on the fly, basing their attacks on exactly where the enemies are as well as their strengths and weaknesses. Gil's movement and attack speed is directly related to the weight and speed statistics of the armor and weapons he has equipped. Bronze armor likely provides more protection than gold armor, but it comes at the expense of a greater weight, resulting in attacks and movement that take longer to perform. Gil can only clear a dungeon floor by finding the key for that floor and then making his way to the door and unlocking it. Walls can be broken down in exchange for a small percentage of hit points, to allow for shortcuts or a quick escape from powerful foes.

Once Gil enters the dungeon he is unable to leave, save for the use of a feather, which immediately sends him back into town. Because Gil is not able to backtrack when in a dungeon, using the feather allows him to sell any items he has found, buy anything he needs, place items in storage, save his progress, and the like, before essentially starting the dungeon over.

The Nightmare of Druaga offers a wealth of customization through its comprehensive system of combination and ability transference, which helps enhance the exploration aspect of the game and gives the player a reason to keep old items that he or she seemingly doesn't need. In town, the player can have Osbald the blacksmith combine two pieces of equipment into an even better one. For instance, two different shields can be combined into one shield that offers better protection, or two different swords can be combined into one sword that deals twice the damage as either of its ancestors. Items can similarly be combined through the use of alchemy at the Academy of Science in town. Both a master and apprentice are available to create new and sometimes rare items. Equipment that is the result of combinations will likely gain special attributes that are useful in battle. If a given piece of equipment is the result of fifteen or more combinations, it is eligible to be sacrificed and have its abilities transferred to another piece of equipment for even more power. In addition, various gems can be found and either used as items in battle, or attached to pieces of equipment to imbue them with special powers and effects.

Even with all these interesting and enjoyable aspects to the game, there are a number of sticking points that keep it from becoming more than an above average game. Nearly all of these points are limitations imposed upon the player that are somewhat understandable, yet nearly always frustrating, and they need to be addressed.

The primary disappointment is how rigid the game is on how and when the player can save. It is perfectly understandable to limit saving in dungeons to directly after clearing a floor. It is not understandable, however, to make that save a temporary one that is deleted forever upon it being loaded - especially when the punishment for dying in the dungeon is as steep as it is (more on that later). Permanent saves can only be performed in town, and the only option that exists is to save and quit. If the player wants to save and continue, he or she will have to wait for their PS2 to restart to continue. In addition, the simple act of NOT saving upon quitting results in a hefty punishment. I accidentally forgot to save in town after playing the game for the first time, and after turning the system on the following day, I was treated to a five-minute lecture about not saving and was made to repeatedly vow that I would never forget again. Further infractions will result in losing half of my gold for not saving in town, or losing half of my gold and all uninscribed items for not saving in a dungeon. It is extremely disappointing to see such an amazing potential for experimentation and customization stifled by an unforgiving save system. What incentive is there to see the results of an item combination when you are completely committed to the outcome, regardless of how useful or useless it is?

Some aspects of the dungeon experience also leave something to be desired. When Gil is incapacitated in a dungeon, he is returned to the entrance and loses half of his gold and any items that he has not gotten inscribed. Inscription is a service that places a spell of sorts on items and equipment that allows Gil to retain them if he is incapacitated in a dungeon (or forgets to save in a dungeon). There is a limit on how many inscriptions can be held at once, and the limit increases as the game progresses. At the beginning of the game, only one inscription may be held. Some may consider this a challenge, but I consider it extremely limiting, as an average player will be able to collect a large number of useful equipment within the first couple hours of play. Storage for items is available in town, but that too has limited space (understandably so, but still another limitation).

A somewhat less urgent gripe is the system of godly protection Gil receives in dungeons. The goddess Ishtar provides Gil with a circle of light that surrounds him, illuminating the area of the dungeon around him. This allows players to better see enemies and dungeon traps in the distance so they can better prepare. Over time, however, Ishtar's protection dwindles, and the light slowly fades, obscuring more and more of the dungeon. The only way to restore the light is to immediately clear a dungeon floor or to offer an item from the inventory as a sacrifice to the goddess. Players who get lost or who are intent on exploring every inch of a floor can expect to regularly waste two or more items per floor if they want to be able to see enemies even one step ahead of Gil.

Despite its problems and somewhat frustrating limitations however, The Nightmare of Druaga is still an above average game - though far from excellent. If you are a fan of dungeon crawlers and are able to overlook or adapt to the various gameplay restrictions, the dungeon exploration, combat, and vast possibilities for weapon experimentation and customization will keep you entertained for many hours on end. For more information, be sure to check out the official site.